Sharing The Joy
by Jo Stougaard

A day with the WienerMobile. How did THAT happen?

Last month I saw a photo of the WienerMobile on twitter and retweeted “on my BucketList“. In case you’re not familiar with the term, “bucket list” refers to something on a “list of things to do” in life. A few hours later I received an email from Kelsey (who works with Oscar Mayer) with “Ride in the WienerMobile” in the subject line. 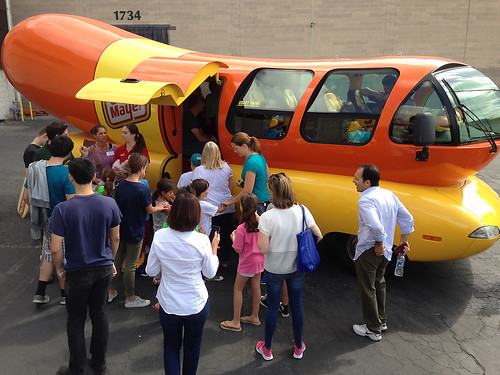 After the initial shock and excitement (it really has been a dream since I was a kid!), I thought about upcoming events on my calendar. Perhaps a ride in the WienerMobile to a hot, new restaurant opening downtown? I was about to cover the L.A. Times Food Festival at Paramount Studios, so that was another option. If my nieces and nephews were still in grade school, I would’ve loved to surprise them with the giant hotdog on wheels. Better yet, how about a visit to the L.A. Regional Food Bank? THAT sounded perfect. L.A. Bites Hunger has been supporting the Food Bank via social media and special chef events, so it seemed a good fit. Both the Food Bank and Oscar Mayer thought so too.

The Food Bank had already scheduled a “Family Day” for September 27th, where volunteers as young as 5 years old could help sort and package food for local pantries. At 8am on the 27th, the giant, shiny WienerMobile pulled up and parked in front of the house. My husband Peter was probably more excited than I was and ran out before me. We met our “Hot Dogger” team, “Jess Cookin'” and “Spicy Salami Spencer”, who were so kind and kept us laughing with hot dog puns (put on your “meat belt”!) all day. The WienerMobile seats four guests, so we invited fellow L.A. Bites Hunger volunteers Susan and Chanel to ride with us. As we checked out the WienerMobile, neighbors stopped by to photograph and ask questions. It was amazing to see our normally subdued neighbors as giddy as we were.

Driving on the freeway was quite an adventure. People reacted the same as we passed them (fyi, the WienerMobile is fast!), total surprise, then pure joy as they tried to snap photos. When we exited the freeway downtown and neared the L.A. Food Bank, driver Spencer hit the horn for the first time. This is no regular car or truck horn mind you! When the button is pressed, the WienerMobile lets out the familiar first line of the classic song, “I wish I were an Oscar Mayer wiener”.

After we parked at the Food Bank, we all went in for volunteer orientation and then to the warehouse for assignments. L.A. Bites Hunger helped pack backpacks for children on this visit. Besides sorting food for 670 local food pantries and hunger agencies, the Food Bank Backpack program guarantees that kids in need, who get free lunch on school days, have food over the weekend too. Hot Doggers Jess and Spencer jumped right in to volunteer with us, and it made for a super fun and satisfying morning.

Next we all headed out to the WienerMobile, where Jess and Spencer invited the families and employees to check out the vehicle, sit inside and take photos. Each person was given a “wiener whistle” of course, which made everyone (kids and parents) even happier. 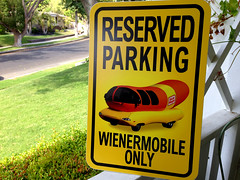 Huge thanks to Hot Doggers Jess and Spencer, WienerMobile and Kelsey at Olson (who initially contacted me). It was just an absolute pleasure to the share the joy.

How to become a Hot Dogger

Fact: 1 in 6 people in L.A. County suffer from food insecurity.

Please help support the L.A. Food Bank by following them on twitter (and sharing posts) or donating here. 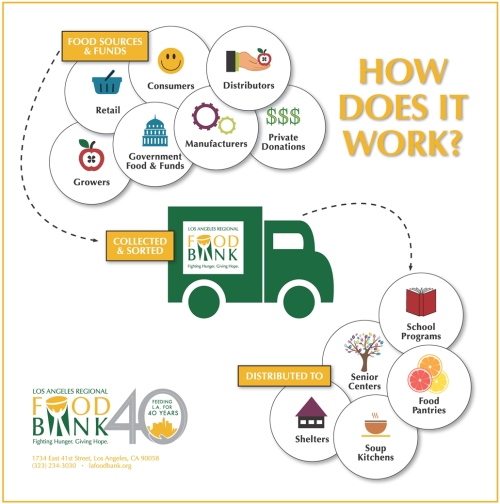 Donate to the Food Bank